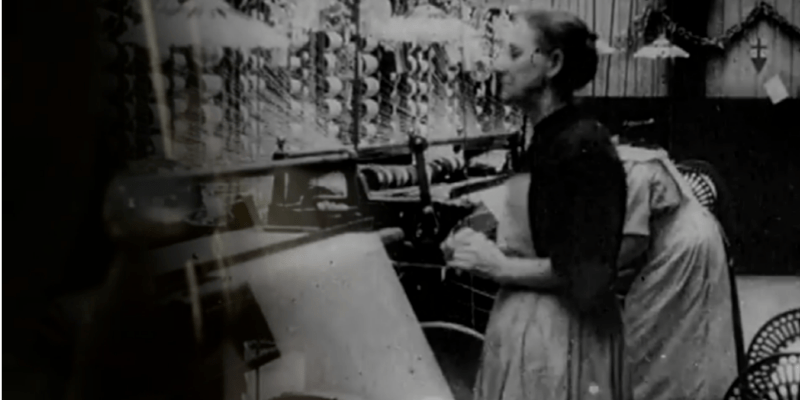 Third in a series of reflections and artist’s responses during the COVID-19 crisis.

We come in to being encased in a world of noise both rhythmic and comforting – in utero our mother’s heartbeat and breathing, the swooshing of blood rushing through her veins, her voice, body movements, and digestive processes.

Often newborns find it hard to adapt to the deafening silence of the ‘big outside’, and it would seem we do have a deeply embedded psychological relationship with the rhythms and sounds of productivity – primordially linked to our protection, continuation and survival etc. It’s something that we have for all time designed to carry with us by setting our labour to the rhythm of our beating hearts, breathing and movement in the form of chant or song.

In 1764 the invention of the Spinning Jenny by Hargreaves apparently tightened this bond between productivity and rhythmic song while simultaneously signalling its demise amidst the cacophonic rise of the Industrial Revolution. The new factories uncoupled the rhythmic connection by bringing with them their own set of sounds, embodied not in song but the machine. That push and pull between our need for/love of rhythm and the threat of being overwhelmed by it, has persisted while the irresistible appeal of being able to produce much more in much less time has enshrined the beloved machine in our hearts forever!

‘By the 1930s, over 50,000 people were employed in the linen industry in Belfast. This led to a whole host of songs about weaving or set in the mills. Some of these songs explored class rivalry between elements of the weaving trade. “They had a lot of songs where they would tease each other while they worked.”‘ Tommy Sands – Mourne Textiles Journal.

Eventually the clatter, hum and drone of productivity’s machinery drowned out the spinning songs, long since replaced by amplified radio music and latterly by wi-fi headphones and individual play lists on phones. Finally the sing song interactions have been killed off keeping us all-the-more focused on the task – machine like! (Apparently among the many injustices inflicted on Chinese migrant Intercontinental railroad workers in North America, they were forbidden to sing while working.)

This week’s archival film collage ‘The Machine’ explores this love. From the Spinning Jenny to the steam driven pistons to the desk top computer, screens and the mind boggling algorithmic throb of the internet holding us in hypnotic trances where we can barely move. Sometimes delaying even the most basic of human functions like eating or visiting the loo in return for just a few more moments in its possessive arms. Apparently this disruption of basic evolutionary function is not restricted to our own species:

“There is a lot of research going on about the effect of traffic noise on birds’ efforts to lure a mater. Birds sing early in the morning to mark their territory and to attract partners, but unfortunately this usually coincides with both the early morning rush hour and early morning flights.” Matthew Jebb, director of the National Botanic Gardens in Dublin.

Within this our intoxication with another ‘flighty’ (sorry!) character – the aeroplane definitely plays a larger than just ‘cameo’ role. Despite all the evidence that if we don’t chill with the infatuation the object of our devotion could very well be our undoing, we have accepted the machine wholesale in its multi various forms as the love of our lives. All this without so much as taking a closer look at the small print for what the deal really involves.

This is historical and a response to truly gruelling human hardship, poverty and hunger. For example, at the end of World War 2, government measures were taken across the UK as a response to wartime austerity, namely to ensure that we would never have to deal with food shortages ever again.

The agricultural expansion plan aimed to raise output from agriculture by 60% over pre-war levels, while the US also moved to greatly increase their agricultural output and pressures were applied to farmers to generate higher yields from smaller spaces. The plan was realised through the increased use of mechanised processes in partnership with an assortment of pesticides and herbicides. This of course was also true for cotton plantations across the globe who cranked up production to meet new levels of demand for copious amounts of cheap fashion garments. This resulted in the system we now know and love for its ability to provide us with as much food and clothing as we want – coupled with the use of air transport to get it when we want – just cos we can.

Around the later 1950’s an answering response to this came from planet earth herself in the form of a reproving silence – as detailed in Rachel Carson’s book Silent Spring. Not only had the pesticides reduced the insect predators of our crops but also the bird life who depended on those insects as a source of food – there had been an audibly demonstrable drop in levels of bird life and bird song across the world.

During the war, second hand clothing was not rationed and so the trade in pre-owned clothes flourished and helped people negotiate wartime restrictions in place 1941-49. A “Make Do and Mend” along with ‘save it just in case’ culture emerged. Even Mayfair-based company Jacqmar created silk scarves emblazoned with slogan prints to “salvage your rubber”. Despite this, buying second hand and make your own clothing had become too strongly associated with austerity and by the 60’s we had a new infatuation with mass produced off-the-peg clothing which chimed out a much groovier ‘fast forward to our incredibly optimistic future’ vibe to it. Since then we haven’t really looked back and right now may very well be the optimum time for it.

Since lock down measures were set up as part of inter/national and global efforts to contain and halt the spread of COVID-19, many of us have noticed more of the sounds of the natural world – in particular birdsong. There aren’t any more birds around than usual, apparently we are not just more able to listen but also to hear. Cabinet Office data shows motor traffic dropped by 73% on 29th March compared with pre-outbreak levels. Scientists have also confirmed that the measures have contributed to a drop in levels for both ambient and seismic – geological,’vibrating the earth’ types of – noises.

“Data from a seismometer at the observatory show that measure to curb the spread of COVID-19 in Brussels caused human-induced seismic noise to fall by about one-third” Thomas Lecocq – seismologist the Royal Observatory of Belgium in Brussels.

“You can hear into the distance, because normally a lot of the detail and subtle sounds – and that includes birdsong, of course – gets lost amidst a mush of traffic noise particularly in urban areas.” Chris Watson, previously a member of the influential experimental 1970s band Cabaret Voltaire.

So perhaps right now is a good time to replace the white noise of our incessant productivity and the internalised stressy buzz of not being productive enough with a quieter but equally absorbing process of reflection.

I’ve never felt comfortable with the words ‘Fashion’ – used lightly to talk broadly not just about clothing and a massive global industry but also in fairly shallow terms about big issues like identity. It strikes me as having something in common with the word ‘romance’ and in much the same way if a relationship were primarily romantic or based on notions of romance we might agree that it potentially skits around on thin ice with very little to console should it plunge through into the chilly waters of the daily grind and practical concerns that lurk below!

‘Fashion’ as a concept and hugely profitable industry is as guilty of instilling callousness in our regard of natural resources just as ‘romance’ (incidentally, also a multi gazillion dollar industry) tends to disregard the nitty gritty of love and the trails of human relationships. As a guiding principal for the designing and making of our garments ‘fashion’ has resulted in the large scale production of a bunch of glitzy rags that we are emotionally disconnected from – that is to say that they all too often hold no emotional worth for us. I don’t think this is a side issue but THE issue in terms of where we are right now – a quiet place where we can start to think through a new way of being and doing – our eating, clothing, general habits of consumption and how we identify ourselves as players who have agency within all this.

In the meantime as the spine encrusted crown of COVID-19 continues on its apparently chaotic roll we will, in due course, understand and then accept that all this wasn’t random at all. That a cause – humanity’s callous disregard for our planet’s natural resources and one other – and an effect were clearly present. As the sounds of this year’s spring recedes and we move into summer, the memory will not fade quickly or entirely but leave a faintly discernible asthmatic creak – like that of an ill-used lung – as a permanent reminder of the moment the potential for change arrived.

For Newborns Still Adapting to the ‘Big Outside’