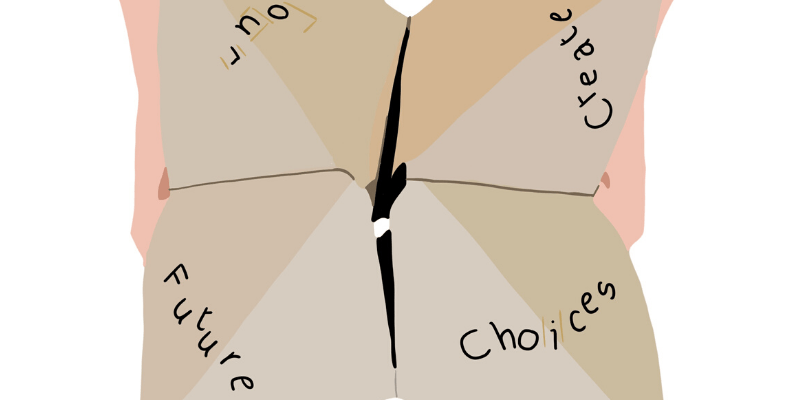 Second in a series of reflections and artist’s responses during the COVID-19 crisis.

Just when we are starting to think that every day is much like the last – same 4 walls and a daily routine that lacks variation, it might be easy to forget that we are actually sitting at the epicentre of seismic change.

While some are sitting out the situation in rural locations, roomy homes with garden areas, many are doing it in small tenement flats in towns and city centres. It’s not surprising that there are concerns about the current and long term effect of the lockdown on our mental health. Just to add to that apparently ‘lock down envy’ (where we get envious of other people’s ‘idealised’ lockdown set-ups) is now a thing. Evidently while our social media platforms are proving to be a life-line in terms of keeping up that human connection via Skype/Zoom get-togethers, yoga classes, ReMode sessions, etc – they are also contributing to our anxiety levels via the usual life style flaunt, humble/brag habits. If you’re still in the process of coming out from under the duvet, all those images of people’s freshly baked sesame bagels and banana bread on Instagram could really get on your nerves! All this got me thinking about where we draw our isolation ‘sense of self’ from and from there to medieval Anchoresses (Anchorite nuns). And, no, I don’t know why that happened.

‘Anchorite’ comes ultimately from the Greek verb “to withdraw”. They were men but more often women who withdrew from the world to avoid physical temptation, engage in spiritual warfare and search for God through complete solitude and discipline. In reality while the choice taken by these folks seems harsh to us now, the alternatives at the time weren’t great. General levels of quality and length of life for everyone was poor but in particular for women – the deal was that you got married, produced and raised lots of children or died a miserable death trying to squeeze one out with little to help other than herbal preparations and a bunch of prayers. Alternatively, life as an Anchoress offered some benefits, you got your own home built for you (tended to be very small – kind of human being sized) and a guaranteed supply of food for life (not a la carte or anything – usually pretty basic and frankly grim). You also enjoyed an elevated position within your community. A central role as spiritual guide/direct line to god and – despite being forbidden to – they often operated as kiosk type schools, banks and exchanged centres for advice and local gossip. They communicated with the outside world including other anchorites via their maids who carried messages back and forth. Alongside all this and the expected daily duties of prayer and self flagellation they also made and mended religious garments and clothing for the poor. Phew!

In short they used the same sorts of strategies we are falling back on now to keep sane and connected in a bonkers situation. While self flagellation is really NOT recommended or necessary in the present (or any) situation the use of messengers (social media platforms) to stay connected, any prayers (meditation and relaxation techniques) to lower our anxiety levels are still very much valid.

So how are we using our online connectivity to survive or increase our levels of comfort and to what extent is our current usage of the system creating more misery for unseen and underrepresented groups globally? This week’s film, The Picking and The Packing / Our Choices = Our Future, was made with pupils of Glenniffer High School around February – several weeks before C-Day.

As part of their process the group explored our use of online clothes shopping. One of the examples they looked at was the scale of fulfilment centres (i.e. Amazon) required to meet demand along with the number/working patterns and conditions of people required as processors to meet those demands within short timescales – often as little as 24 hours.

‘This year Brits are set to spend an impressive £16.2 billion on online sales of clothing, fashion accessories and footwear – at the click of a button. In 2017, the online fashion market will increase 17.2%, continuing fashion’s spot as the most popular category bought online.’ Mintel’s Online Fashion UK 2017 Report.

While online purchasing only accounts for around 20% of the clothes we buy and so 20% of the environmental fall out which is still a considerable amount of natural and man-made resources being mishandled in the production, manufacturing and use phase. There is something about the covert nature (for individual shoppers) of online shopping that allows us to further distance ourselves from our own rabid consumer habits mediated through a slick system of ‘one click’ ordering, receiving and returning by post. However COVID-19 has brought with it some new and very human problems.

One of these is with the on the ground, supply to and demands of individual shoppers like you and me. While some companies (i.e. Next) have now closed down their online clothes shops, we are still able to use postal delivery systems. Amazon, the main service provider of our postal shopping habits, and other fulfilment centres grow in strength as a means of continuing to access not just what we need but what we want to the detriment of delivery and fulfilment centre workers:

“Warehouse workers in the supply chains of several UK high street brands are begging people to stop ordering frivolous fashion items amid the crisis, as workers doing 12 hour shifts note a surge in sales making social distancing impossible in their workplaces” The Guardian 03/04/20

Obviously there are things we can do as individuals to reduce the risks these workers face by thinking twice about what we order and ultimately, ordering less. Of course those of the ‘spend, invest and keep the money flowing’ persuasion would disagree claiming that if we stop buying then those at the bottom of the pile (i.e. factory workers) get even less. It’s a poor excuse for hanging onto a system which necessarily benefits from human want and misery in order to thrive. Yes, continuing to buy ultra cheap clothes might keep the system afloat but it certainly won’t address the starvation currently faced by underpaid workers who have been laid off with no severance pay from manufactures whose orders (some of which were already shipped) have been cancelled by UK companies and those elsewhere.

Add to this the further pressure from those same companies demanding discounts on the clothing which they anticipate will be less covetable to consumers due to their being ‘out of season’ by the time high street shopping resumes.

This collapse of the fast fashion industries – which was on it’s way in any case just hurried along by the outbreak – flags up a umber of issues. The fast fashion industry is based on a system that’s been getting away with a callous disregard for human well being for a long time and there is now an urgent need for the setting up of new systems, national and global infrastructures, new values and jobs with fair pay and conditions to replace previously poorly paid ones.

Because of the financial heft that big operators wield it’s unlikely that they will sink forever, after all they can shut down operations in response to those cancelled orders then open up and start again at a moments notice – assuming they have any workers left alive to bring back. It’s as yet unclear which types of businesses are most likely to survive all this, the large or the small, but it seems that scale and localisation of our endeavours will be important.

Centrally, the diversification of the types of resources we use to make our clothing necessitating research and development into alternative and locally grown fibres with healthy financial backing from governments. There have and continue to be a small cohort of designers across the globe working within this arena producing innovative outputs to inspire and develop further (Vin + Omi’s Sting project, which has seen the duo develop 20 textiles and processes using nettles since 2004). Also the adoption of new ways of making clothes including zero-waste (Holly McQuillan among others) and modular design – again lots of designers and researching and developing work in this field.

Whether a small company with 2 or 3 employees or an individual in a small room in a small tenement flat there is an opportunity for us to be quietly creative and/or to continue to take part in the outside world by sending our signals to inspire and encourage. Just because what you do comes from a diminutive space does not restrict the scale of our imaginations, the ambition of our thinking or potential for full realisation. What we do today is still shaping tomorrow.

Right now I’m thinking about Grandad Tom who served on several Scottish Lighthouses including the very isolated Bell Rock Lighthouse in Arbroath. For 6 weeks at a time (often longer when the relief boat couldn’t make it through) and with only the company of the 2 other officers on duty it was live living on a vertical submarine! Sometimes the keepers sewed, knitted and cross stitched and I know that during that time he not only read but wrote extensively. In fact I remember him being somewhat laconic as a character and that he “wasn’t to be disturbed”. He spent a great deal of time (in my child’s eye view) in a very small cupboard with a sliding door in the flat he shared with my Gran in Glasgow. In that tiny space he had his desk and lots of shelves lined with books. In his 60’s at that point he continued to write and was studying Russian. Perhaps he had retained from his lighthouse days a need for restricted space in order to focus his concentration. Whatever the reason was it left me with a strong sense that big ideas can take root and flourish in small spaces.

Please make a contribution by writing to awaj@dhaka.net

Give money directly to non-profit organisations that are providing support to garment makers that have lost their jobs. We recommend:

Donations will go directly to workers who have lost their jobs. This will mainly be in the form of cash disbursements to make sure that their basic needs for food and shelter are met.